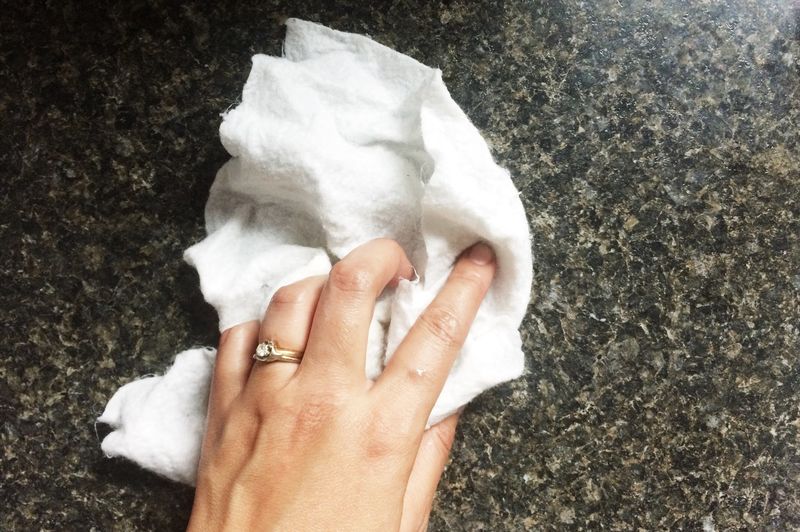 One of the last hold outs on our move to be more eco-friendly is paper towels. We have them on Subscribe & Save with Amazon to deliver a case of 24 rolls monthly. We use two dozen rolls of paper towels every month! That makes up about half of our trash output.
For the last decade or so I've watched bamboo being used more in non-wood products, like bed sheets and bath towels. On a whim I did a search on Amazon for simply "bamboo" to see how many things were being made with this sustainable resource. 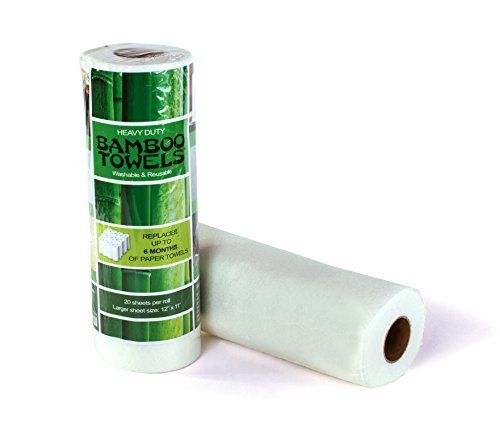 These are the towels I bought, $7.99 for 30 (took a month to use the first roll)
Of the many results that came up, the one that caught my eye was bamboo paper towels. Was this possible? Were they really reusable like the title implied? I read the reviews.
"I purchased 6 rolls a year and a half ago"
6 rolls in 18 months? That's one roll every 3 months. Woah. The same reviewer says she washes and bleaches them too.
"I would say that 95% of the towels that I still have are as white as the day that I purchased them."
If that's true, that's a game-changer. Hmmm... What about produce? We know produce lasts longer wrapped in a paper towel, but will this cloth-like material work the same? Another reviewer uses one reusable towel instead of two paper towels.
"And the best part is I think they work even better. My beet tops and kale have lasted a week and a half."
Others said the same, so produce is preserved and they hold up in the wash. Well, for $8 it's worth a shot.
My reality
These are so thick! The first one I tore off I could feel the difference immediately. It feels more like a cloth than paper. I was nervous using the first one. 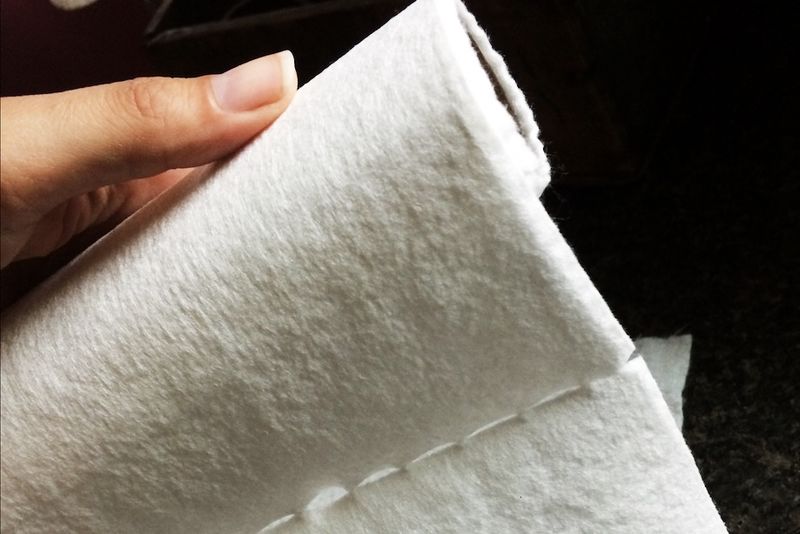 These guys are thick, so use two hands to tear them apart. Also, this is the end of the roll, in case it looks a little thin.
How they wear and wash
I keep a small basket in the corner of the kitchen for dish towels so I didn't have to change my routine much. I toss these in there too and wash them once or twice a week with the rest of the laundry. 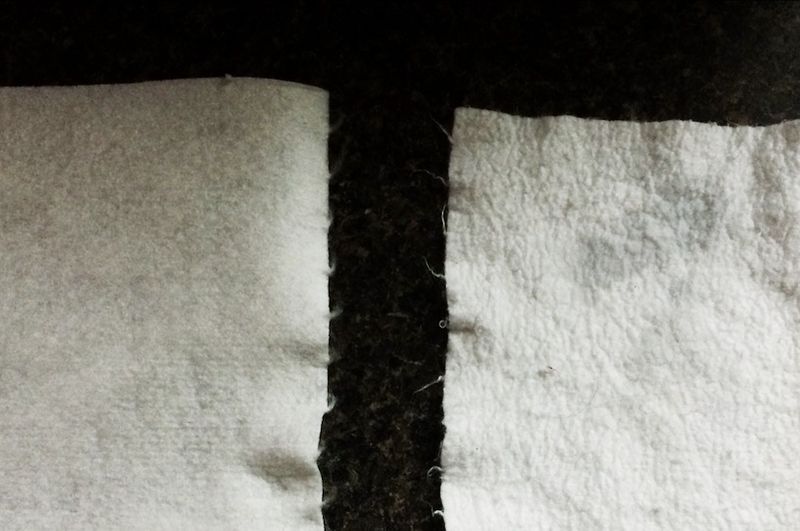 Left: NEW towel // Right: Used to wipe down the counters for a day, then washed and dried normally (no fabric softener). It shrunk and pilled a bit but works just as well, even more absorbent.
But reusable is too much work
The husband and kids had a hard time moving over to these. Husband wanted to rip a new on off the roll for everything and got frustrated that he couldn't just throw it away. He went back to paper.
What if I throw one away?
The kids think they're too nice to use and they're afraid of accidentally throwing them away. Although that wouldn't be terrible since they cost $0.27 and they're completely biodegradable. But they stuck with paper too.
How is this different than just using a cloth?
This one is personal to me but the main reason I don't use fabric cloths for cleaning is because of that occasional red wine/tomato sauce/grape juice spill that would most definitely stain the cloth. Often even with bleach it doesn't completely clean the cloth and I'm a bit OCD when it comes to stains. I would throw it out. With these biodegradable towels I don't feel the same guilt when I have to throw one out.
Another advantage to these over cloth is that they use far less space/energy to wash. I can wash at least twice as many per load as with fabric. And, they take up less storage space than cloth.
How I personally use them
While I train the family, leading by example, I'm discovering my own habits and training myself to think differently about these towels, because they really aren't the same as paper towels and I've had to adapt. 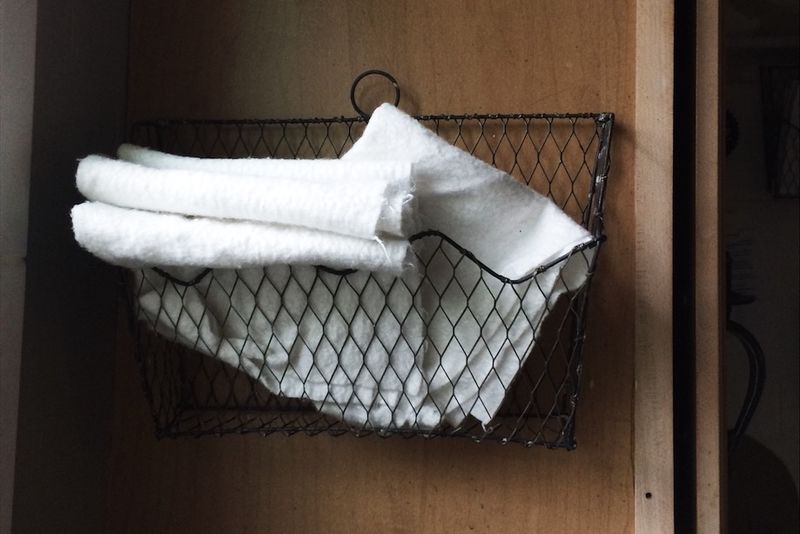 A small basket on the cabinet by the sink holds gently folded towels for reuse.
I keep the bulk of the clean towels in the basement and just a few folded gently and hanging by the sink. I use them for quick snacks instead of dishes, for wrapping produce, and for cleaning spills, but primarily I use them for cleaning.

I use the same towel all day, washing with soap, then laying across the sink to dry.
One to wash
I keep one wet one at the sink that I rinse and reuse throughout the day. I wash dishes with it and wipe down counters and the stove top. It holds up very well to repeated rinsing and squeezing water out, and it's soft on dishes and counters. If it gets too dirty I toss it in the wash basket and grab a new one.
One to dry
I keep a second one, dry, next to the sink to dry my hands after cleaning. I still use regular towels for drying hands and dishes, but I realized at some point I was grabbing paper towels to dry things, so this one by the sink prevents me from reaching for the roll. 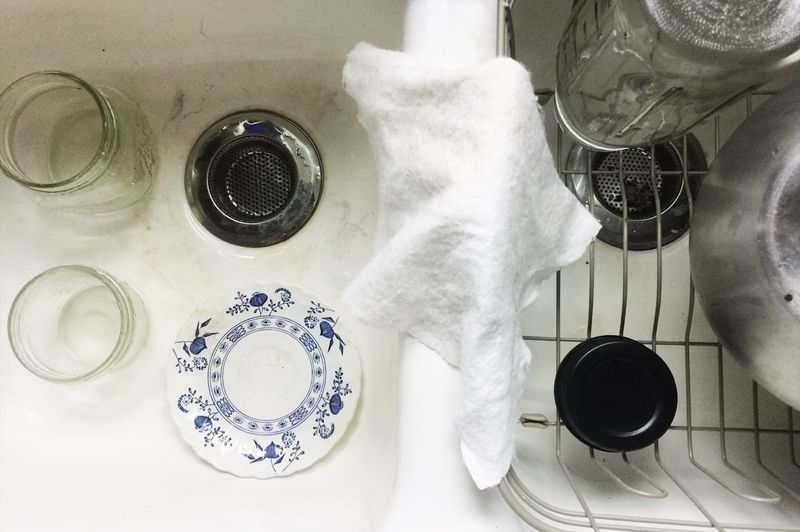 Dries completely in about an hour hanging just like this. If it gets too dirty, I toss it and use the dry one to wash, rotating in a new one to dry.
The Bottom Line